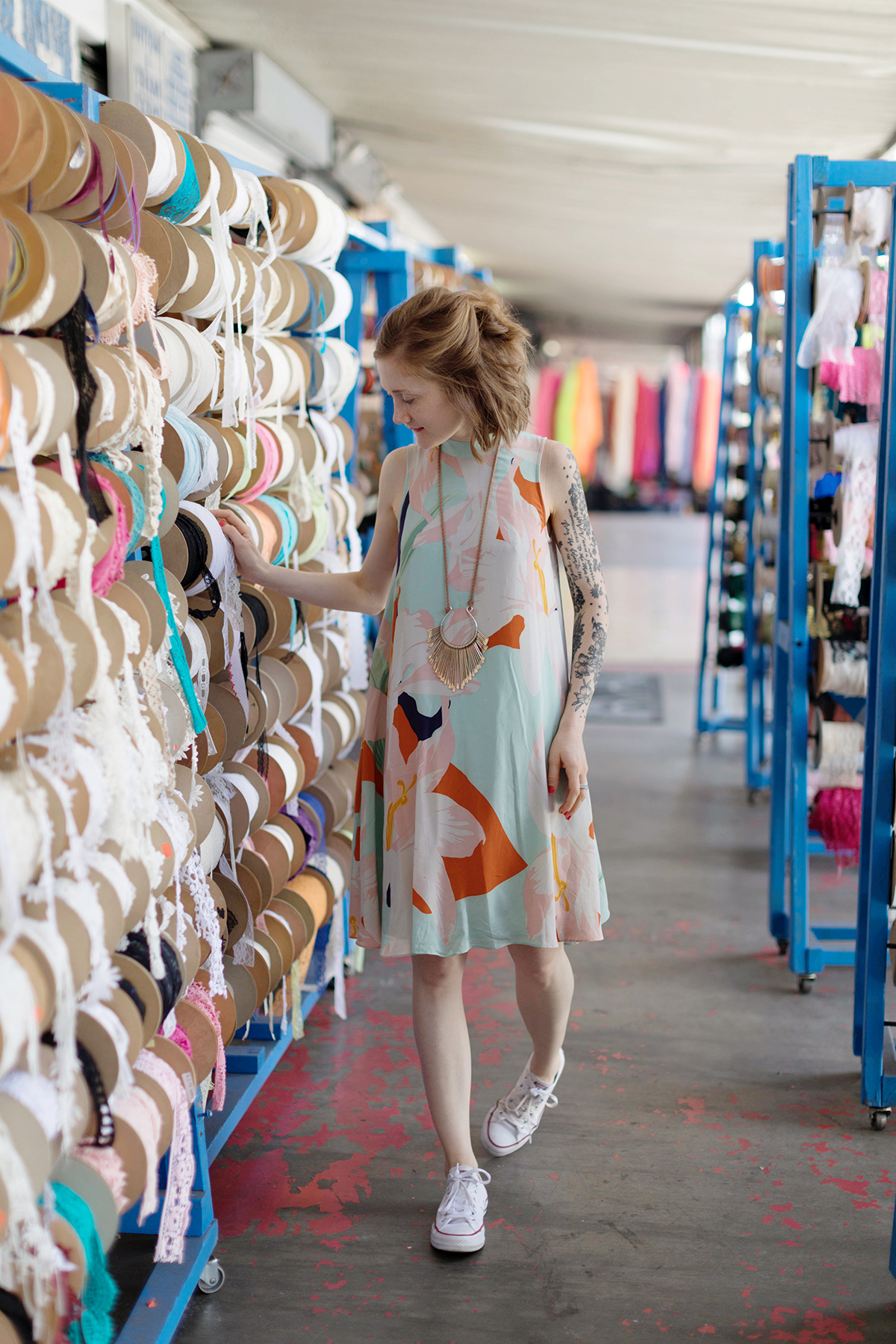 On the last day of the Mimi G Sewing Conference, the entire group hit up LA’s Fashion District to fabric shop. Every city I’ve visited – New York, London, Paris, Atlanta, Miami, etc – does their fabric district differently. In some cities, fabric stores are concentrated in a few blocks or streets; in others, fabric stores are more spread out. In Los Angeles, the fashion district is the former, squeezed into a four block radius, from 8th street down to Olympic Boulevard, between Maple Avenue and San Julian Street. According to the LA Fashion District website, there are over 200 fabric and trim stores in this area. The great thing about LA’s fashion district is that shops are open 6-7 days a week as opposed to New York where they’re only open 5. Now, I only shopped the district for two afternoons, so I’m no expert, but I did go through many of the stores with a sharp eye, hunting for lingerie laces, elastic, trims. Below are my favorite spots with the addition of a few spots that others suggested. Also something to note – none of these stores are dedicated lingerie shops. Just fabric/trim stores that sell some lingerie supplies. 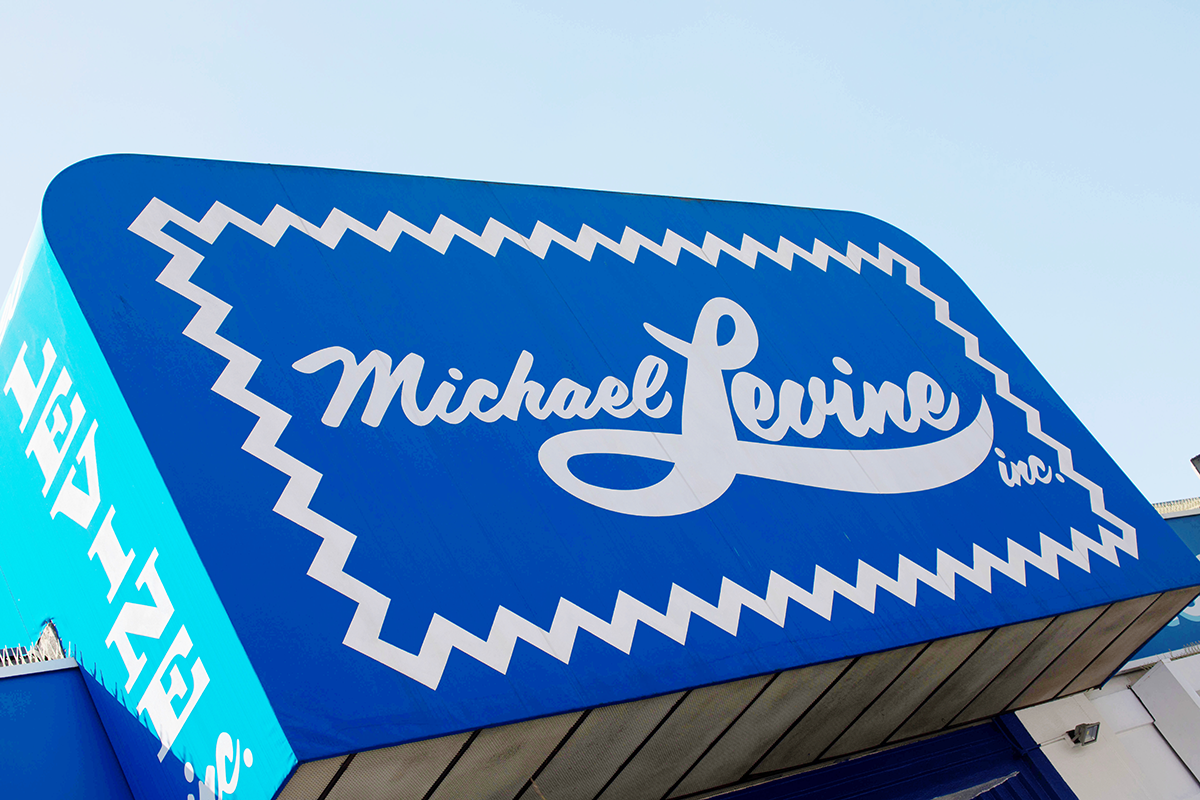 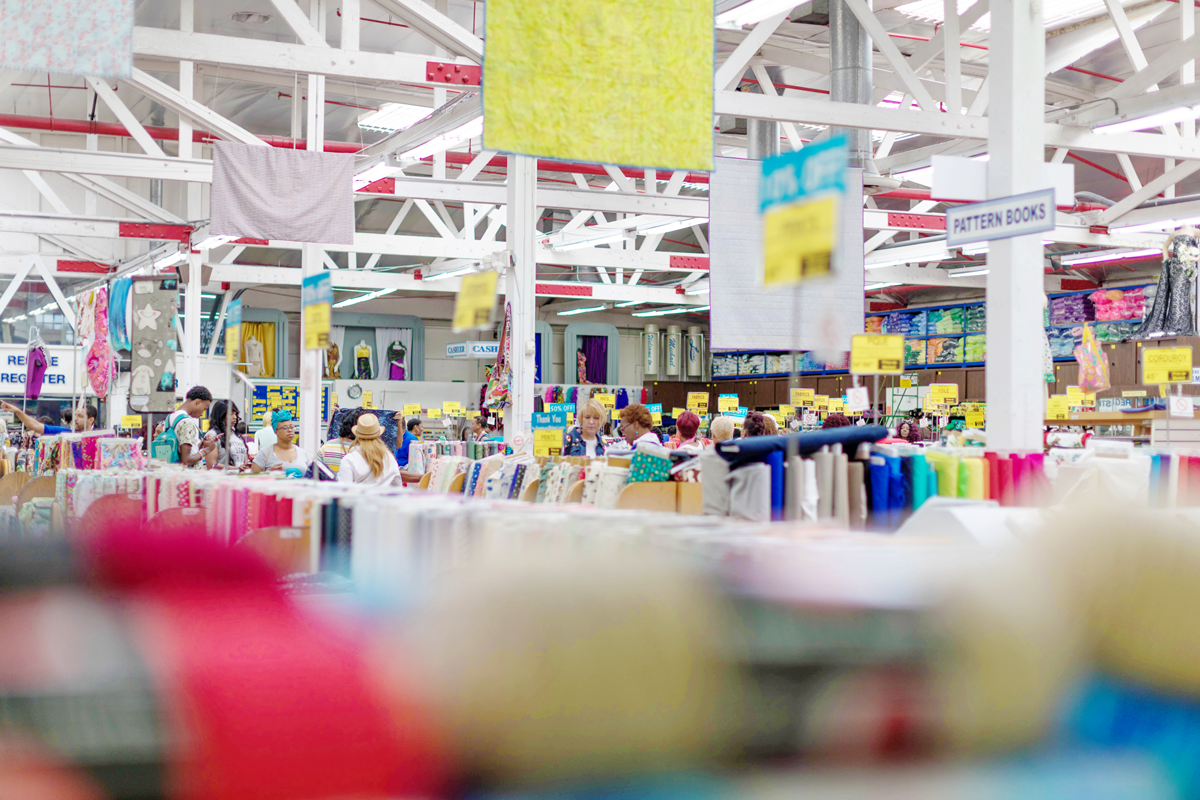 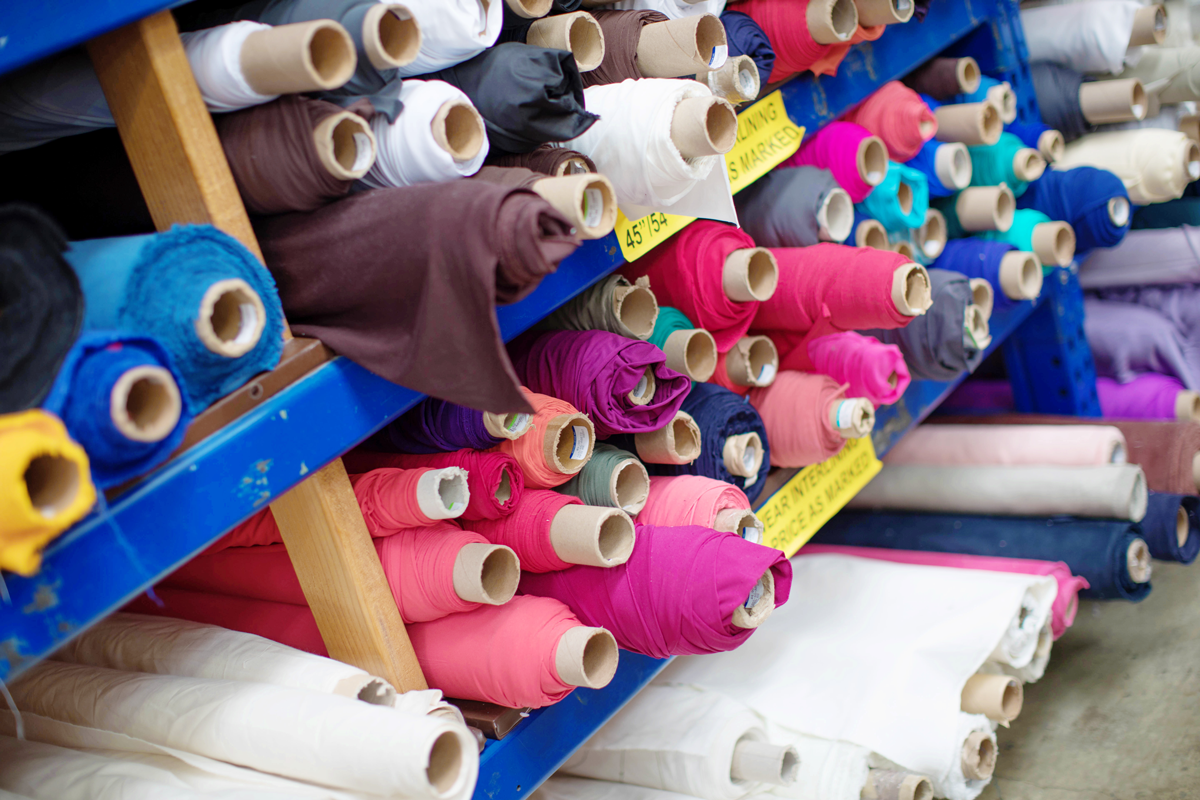 Micheal Levine
920 Maple Ave
(213) 622-6259
www.lowpricefabric.com
Michael Levine’s is one of the largest fabric retailers and wholesalers in the nation, with two retail outlets and a super stocked warehouse. They carry apparel fabrics as well as fabrics for quilting and home decor. Other than their Spandex/Lycras, there wasn’t much for us bra makers. However, tucked in the back right hand corner of the shop are novelty elastics. There wasn’t much, but the sources were high quality. One was Shindo, which is located in New York, and supplies elastics and trimmings to notable RTW labels. I have even looked at their assortment for my own intimates line. 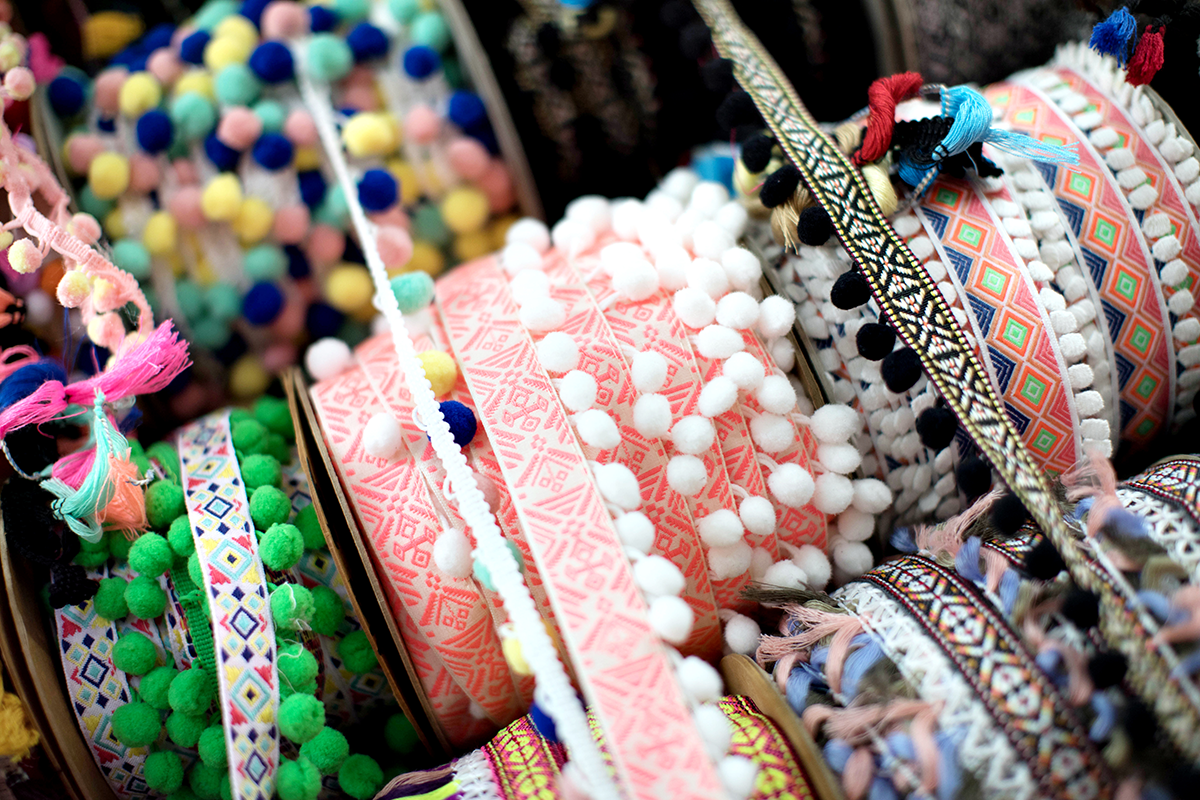 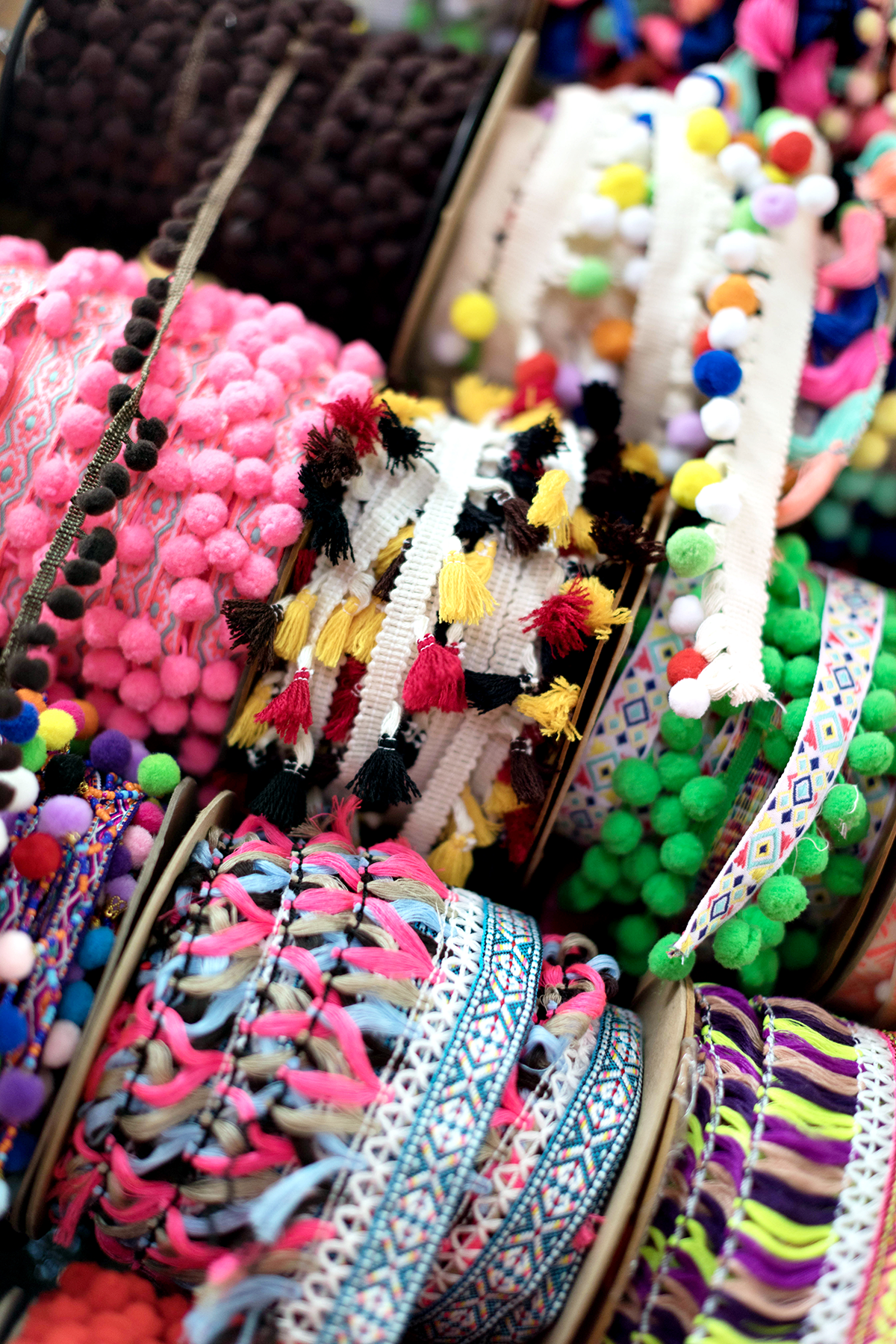 Trim Expo
828 Maple Avenue
213-622-2323
www.bijanexpo.com
$$
Oh man, I was in heaven, hog heaven, when I walked into Trim Expo. Shout out to Brittany and Rosy for bearing with me through the entire store as I scoped out their elastics, laces and pom pom trimming! Trim Expo had the widest selection of laces in widths from 1/2″ to 10″ and wider as well as both picot plush and flat elastics. Most of the elastics were located outside in the clearance section (shown in the lead image of this post), while the laces were inside. Also inside was a floor to ceiling wall of pom poms. No really, floor to ceiling in every shade, color and beading imaginable. None of them had stretch, so you’d have use them sparingly. 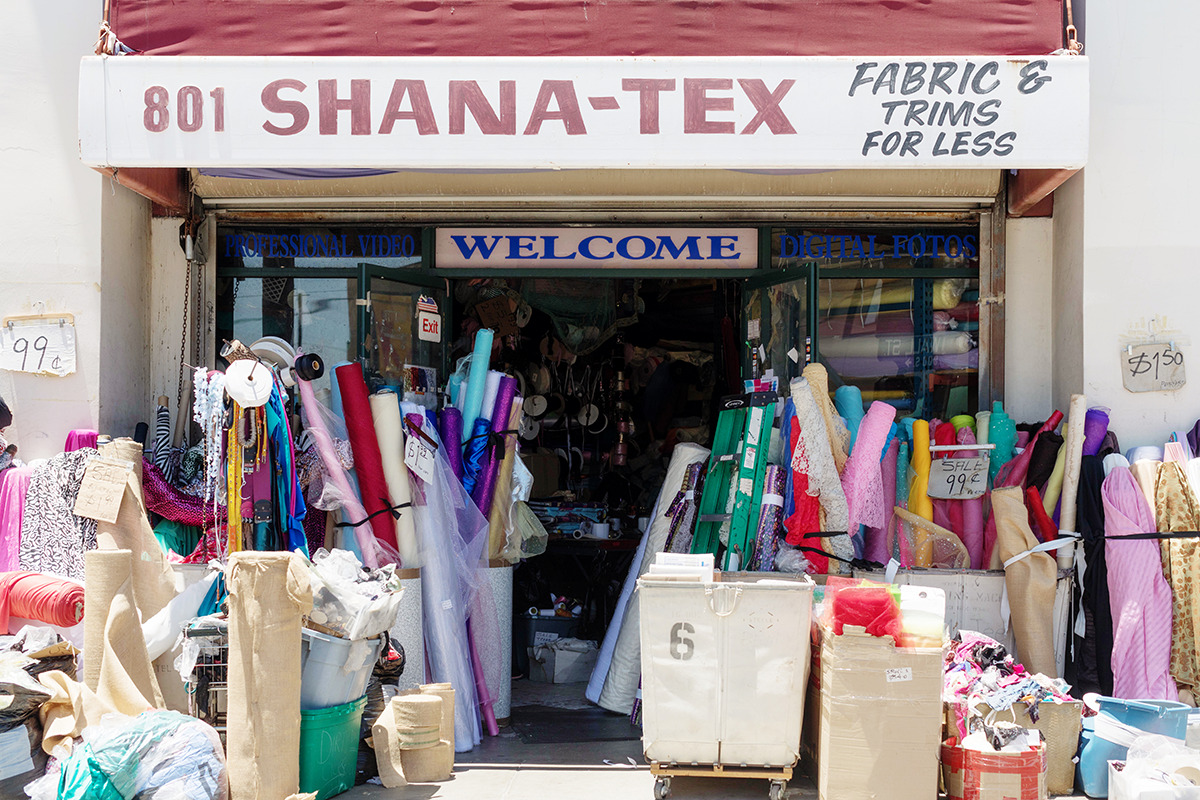 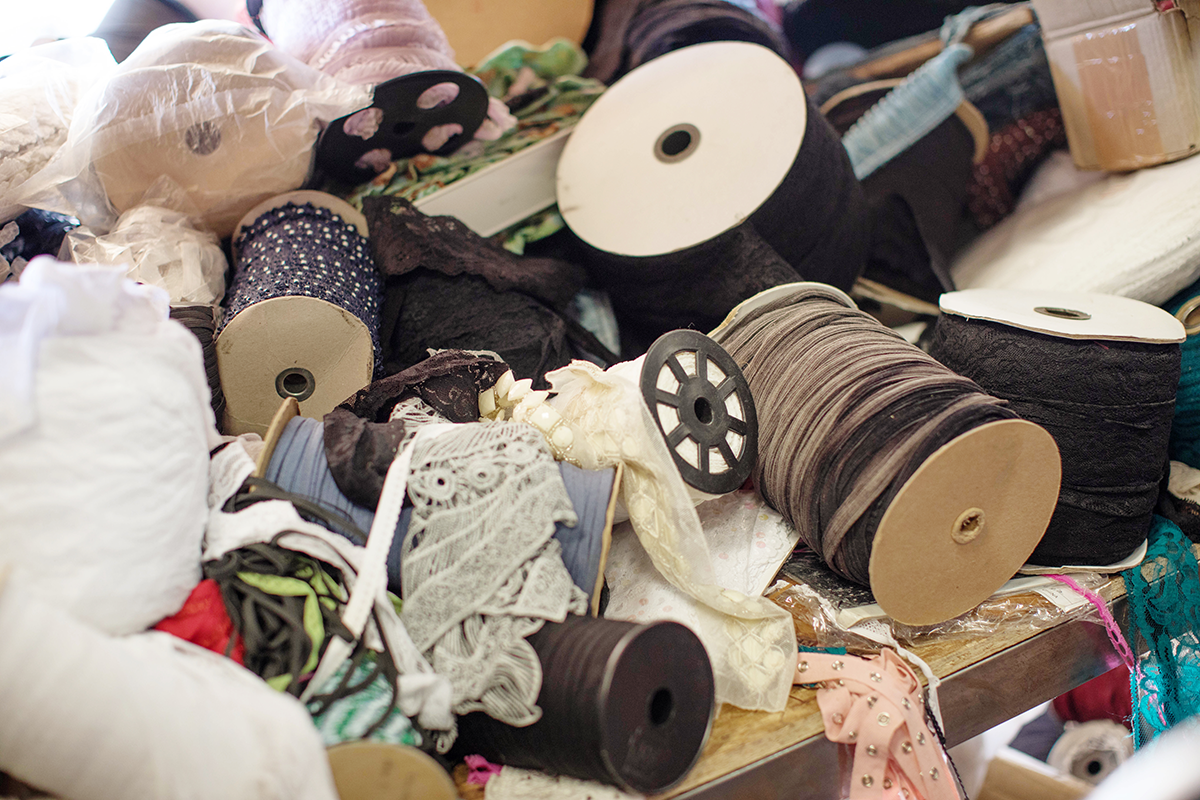 Shana Text
801 S. Wall Street
213-622-1797
$
Located on Wall Street, one street over from where most of the fabric stores are, I stumbled upon Shana Text on my second day of shopping when I visited The Original Flower Market. A beautiful mess is the best way to describe it. Standing on the outside looking in, you can see trims including elastics, laces and more stacked from floor to ceiling. Seriously, from floor to ceiling, just like the pom poms. So it’s no surprise that you will literally have to dig through to find something. If I were you, I’d go in with a game plan (i.e. looking for blue 3/8″ elastic) or else you’ll get lost and spend hours in this giant treasure chest. The prices are dirt cheap, and the quality ain’t that bad either. 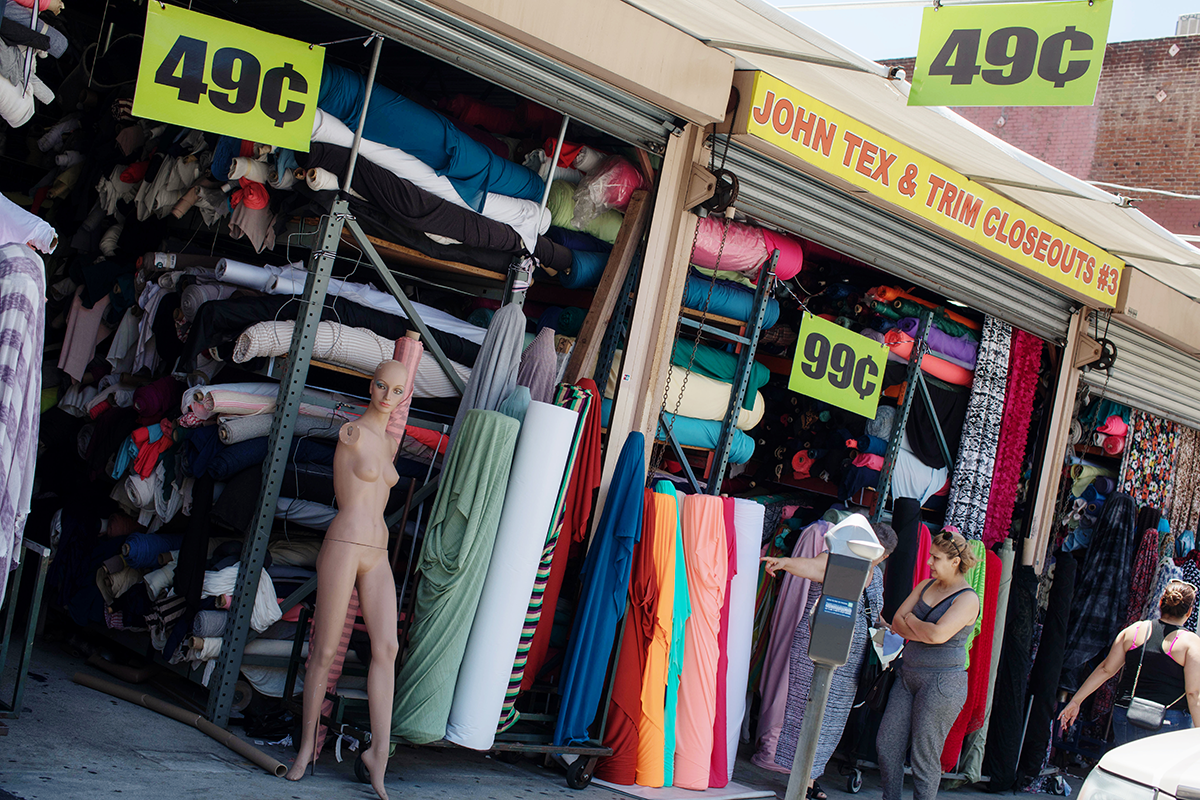 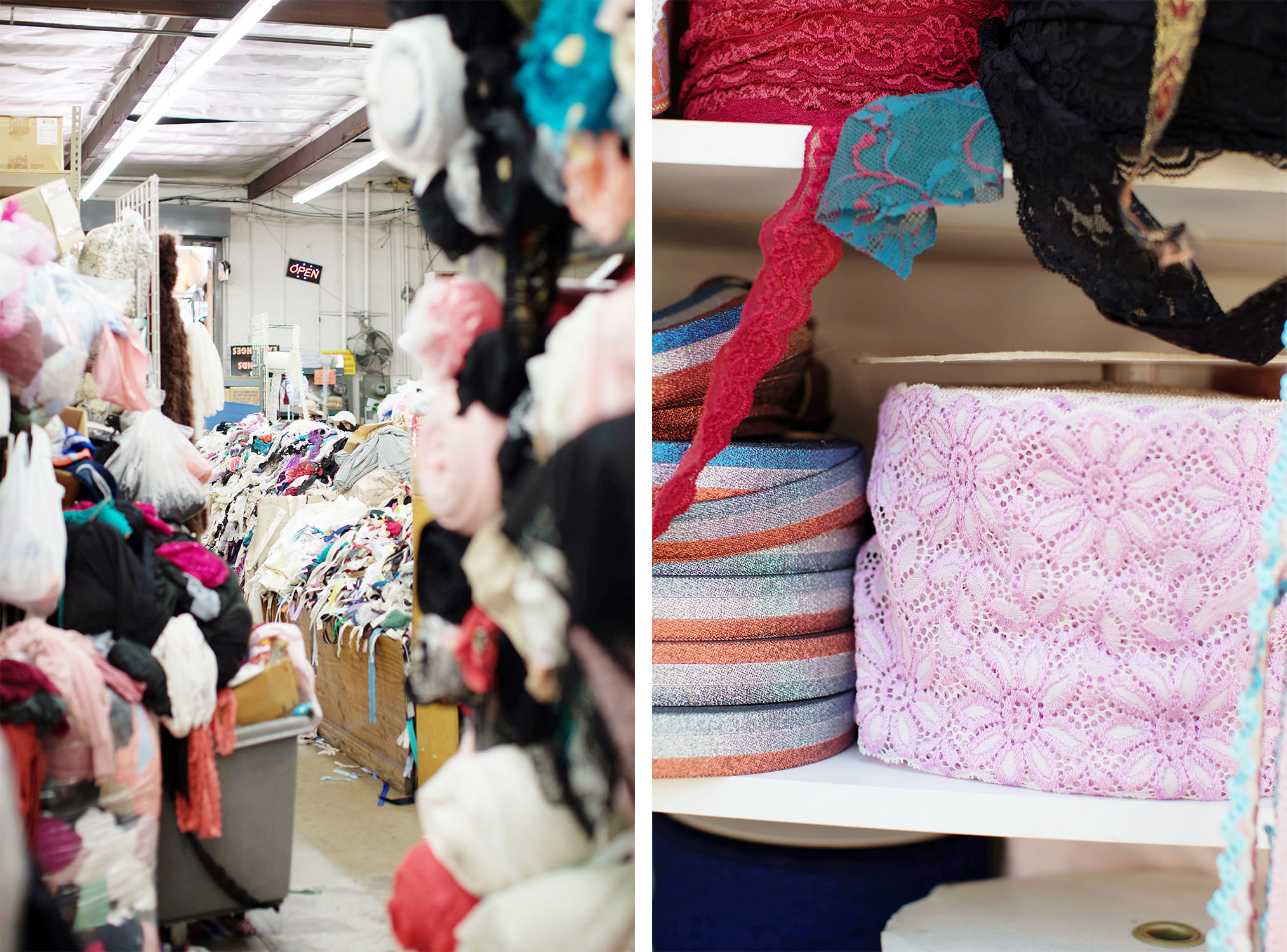 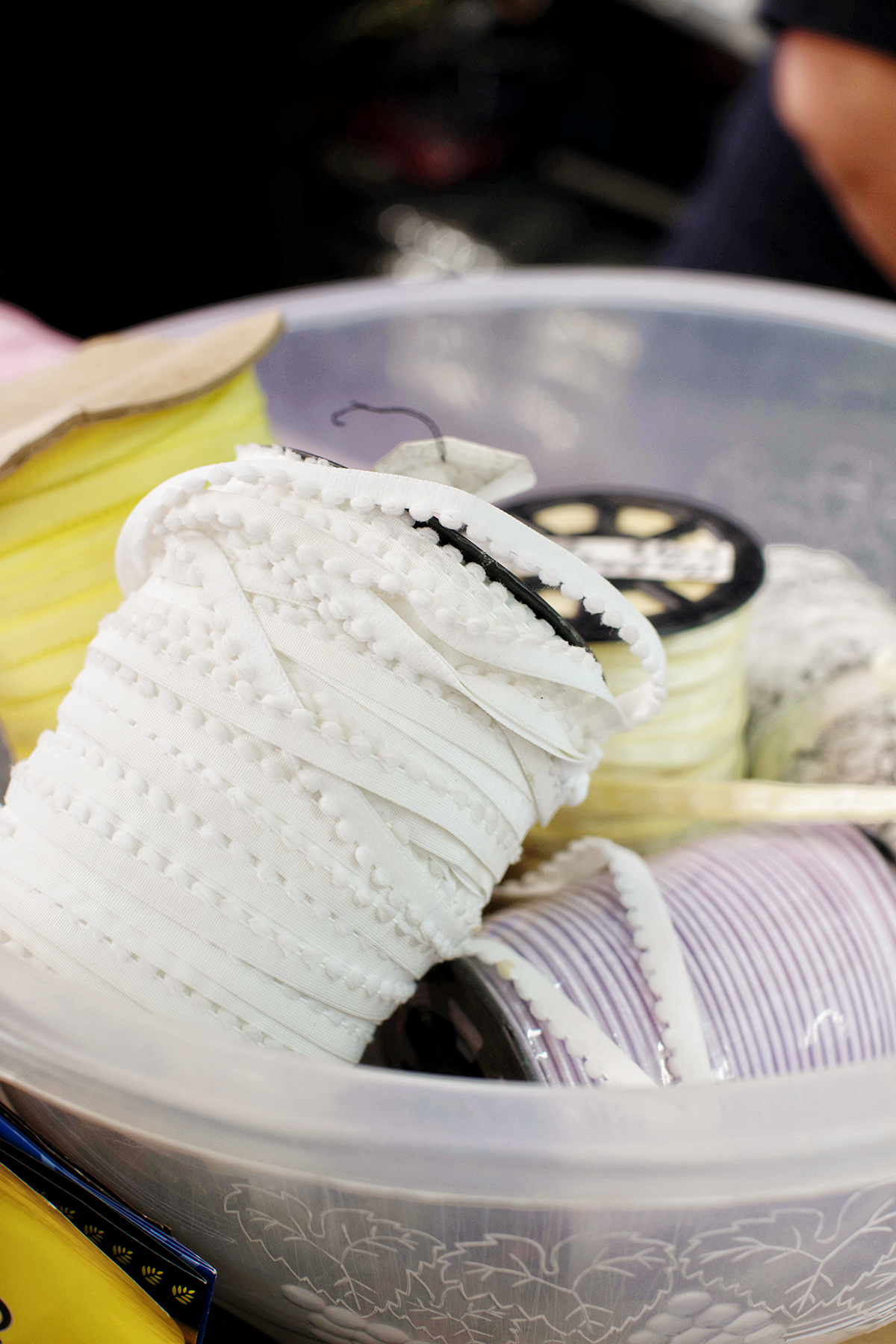 John Tex & Trim Closeouts
851 San Julian Street
(213) 949-1800
$
Hands down the messiest store I went too. Dirty too. I picked up a roll of elastic and there was a bug on it. However, this is like Jomar in Philadelphia. You can find some incredible gems at amazing prices. They had a good assortment of high quality laces and elastics. Smaller elastics (3/8″ and less) are harder to find, especially the picot plush variety and on the left side when you entire are two entire rows of elastics this width including ones with specialty picot edging. I’ve never seen pom pom plush elastic before – I didn’t know it even existed! – and I swooped up a whole roll (100+ YDS) for $12 (see in photo above). Yes, $12. Don’t hesitate to haggle with them either.

Blue Moon
305 East 9th Street #110-111
213-892-0401
www.bluemoonfabrics.com
$$$
Blue Moon was the nicest fabric store I visited. The interior was clean with fabrics neatly and nicely displayed. They specialize in carrying basics, spandex, miky, faux fur and more. What I was most interested in was the Spandex/Lycra. Very high quality.

FIDM
919 South Grand Avenue
213-452-5010
$$$
I did not visit the FIDM store. It was suggested to me by Elma of Elma Lingerie. Supposedly, they carry some lingerie supplies. So if you’re in the area, stop by!

Time to Eat!
After all that fabric shopping and walking around, time to get your grub on! When you’re finished stocking up on laces, elastics, and pom poms, hop on over to Wall Street and treat yourself to a nice meal at Poppy + Rose. I had the caesar salad, but the table next to me ordered chicken and waffles that looked amazing!

If you’re still tripped up on where to buy all the fiddly bits for lingerie, don’t worry. Hop on over to my webshop where I sell entire lingerie kits. 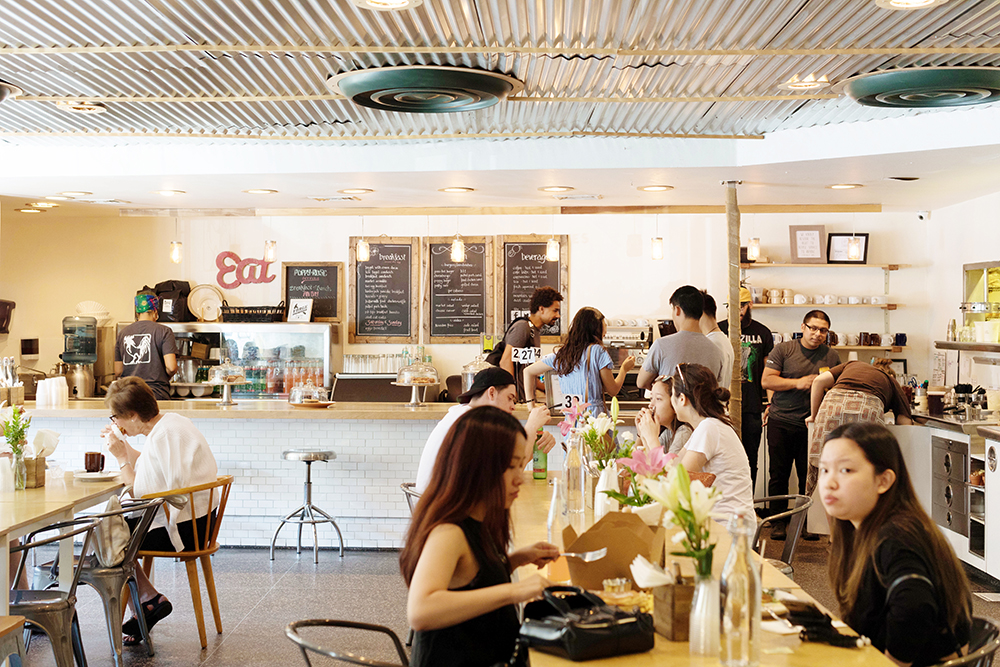 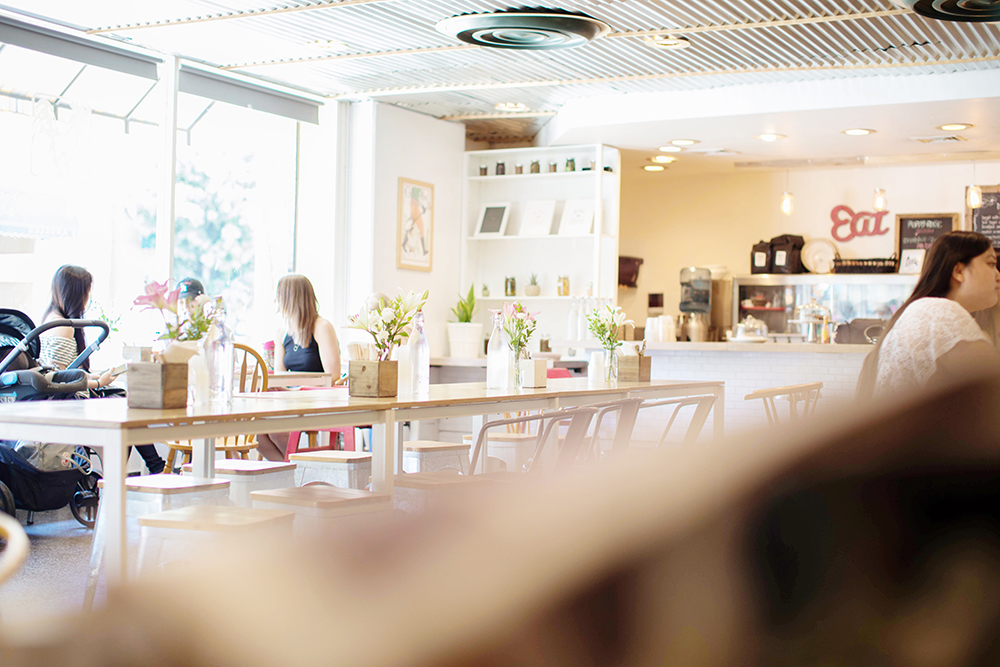 If you have any suggestions on where to shop for lingerie fabrics and trims in LA, comment below. I would love to hear and I’m sure there are other lingerie maker who’d like to know too! 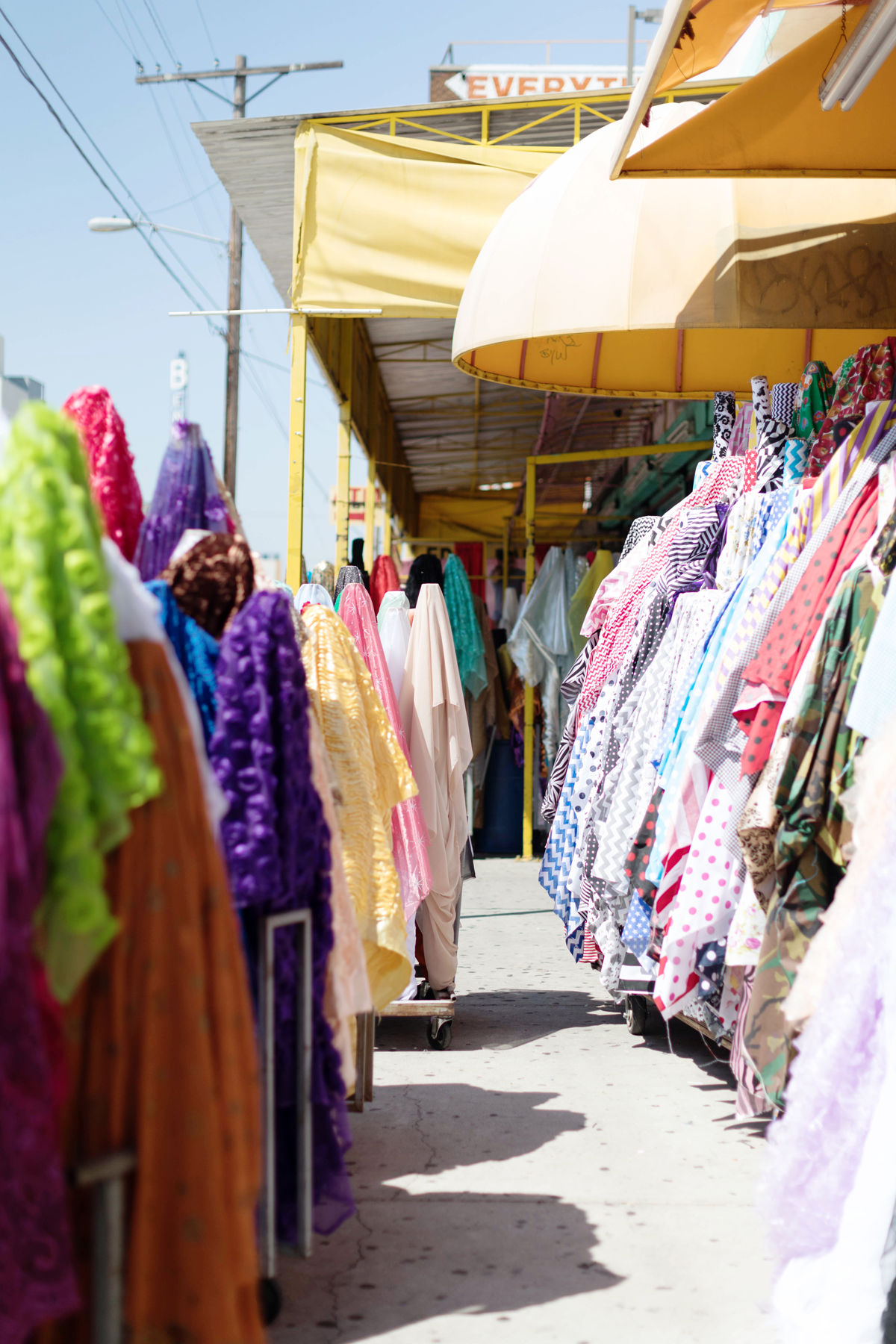