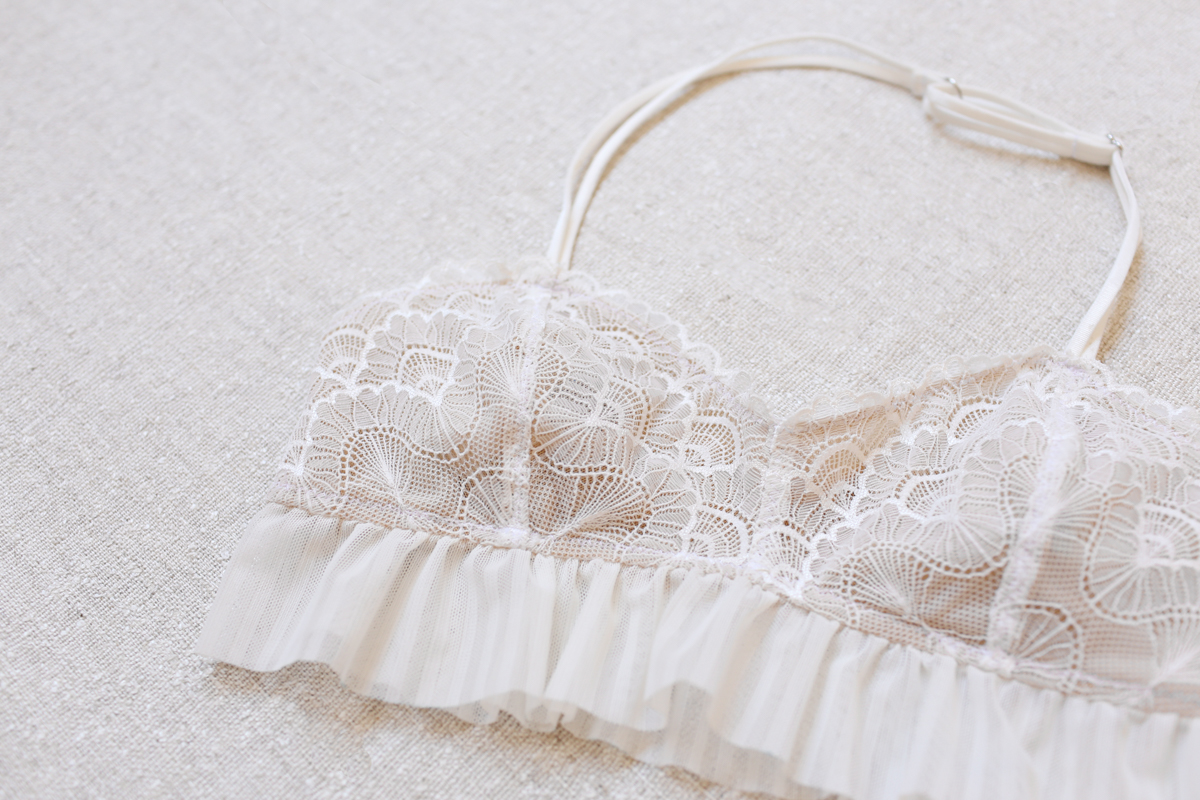 I’m super excited to be sharing the second variation of the 8228 bralette, one of 2 lingerie patterns I recently released with Simplicity. If you missed the first, I showed how to eliminate the racerback, clean finish the seam allowances and add stability. Today, I’ll be showing you how to add a ruffled bottom band and thin, halter straps. Ready? Let’s go!

Step 1: First, let’s look at where I’m starting this tutorial. I’ve jumped ahead and assembled the cups using the method shown in the first variation (clean finished seam allowances). The piece to the right of the  cups is the upper back band and the piece below it is the ruffled bottom. I eliminated the lower back band and front band and replaced it with a long strip of striped mesh. It measures 2 ¼ x 38 ¼” – I got the number for the length by multiplying the length of lower back band and front band (25 ½” for a size 32B including seam allowances) by 1 ½”, which would be my shirring ratio (chosen arbitrarily). I got the number for the width because the original bottom bands were 2 ¼”.

Because the stretch mesh doesn’t have a scalloped edge, I’ll be finishing the top of the upper back band with a ⅜” picot plush elastic, so I added ¼” to the width (when applying the elastic, I have it overhang ⅛” so I don’t have to trim).
Also, the pattern for the front band had a slight curve upwards at the center front. I didn’t keep, but cut a straight rectangle. Because this is a small size, I don’t think it will make a difference. If you’re a C cup or larger, I suggest keeping that curve.

Step 2: Finish the top of the upper back band with ⅜” elastic and sew a basting stitch (straight stitch, 3mm stitch length) on the bottom ruffle approximately 3/16” away from the fabric edge (3/16” because the seam allowances are ¼”, so this will prevent the basting stitches from being visible).

Step 3: Attach the upper back band to the cups at the side seam using a straight stitch. I didn’t finish the seam allowances since I’ll be adding channeling later. After, sew the ends of the bottom ruffle together with a straight stitch to create a circle.

Once this is done, fold the bra so that the seam allowances are facing one way and the bra the other. Lay ⅜” picot plush elastic on top – fuzzy side up and picot edge facing the edge of the fabric. Sew down with a small zigzag stitch on the flat side. You want to make sure that your stitches are going through the stitch made in the previous step (attaching ruffle to cups/upper back band) exactly and that you’re sewing through the seam allowances only. After sewing the first pass, flip the elastic up and sew the second pass on the opposite side of the elastic. For this pass, you’ll be sewing through all layers (seam allowances and bra).

Step 5: Once the bottom band is attached, now it’s time to add the straps! Yay for straps! The directions don’t have you finish the top of the cups (it says to leave raw), but I’m going to add ¼” elastic. This will add stability and help hold the straps.

Step 6: The straps for this bra are two 3/16″ thin elastics, which together, is approximately ½”. First, I cut two lengths of elastic that were 12 ½” long and two lengths of elastic that were 10″ long. I fed both the longer elastics (the 12 1/2″ ones) up and over the center bar of the slider and down again so that it looked like a belt buckle with one short end and one long end. Then I sewed down with a bar tack. After, I fed a ring through the other end and weaved the elastics through the slider just as I did before for the other side. Once I did this, I wrapped the shorter two strips of elastic (the 10″ ones) through the ring and then secured with a bar tack. The final step was to attach both ends of the strap elastic to the strap points with a bar tack (this method for closely follows my other method for making standard elastic straps).

Please, please, please! If you make a bra from the Madalynne X Simplicity line, I’d love to see it! Email hello@madalynne.com or upload to IG and use the hashtags #bramakingwithmadalynne and #simplicitypatterns