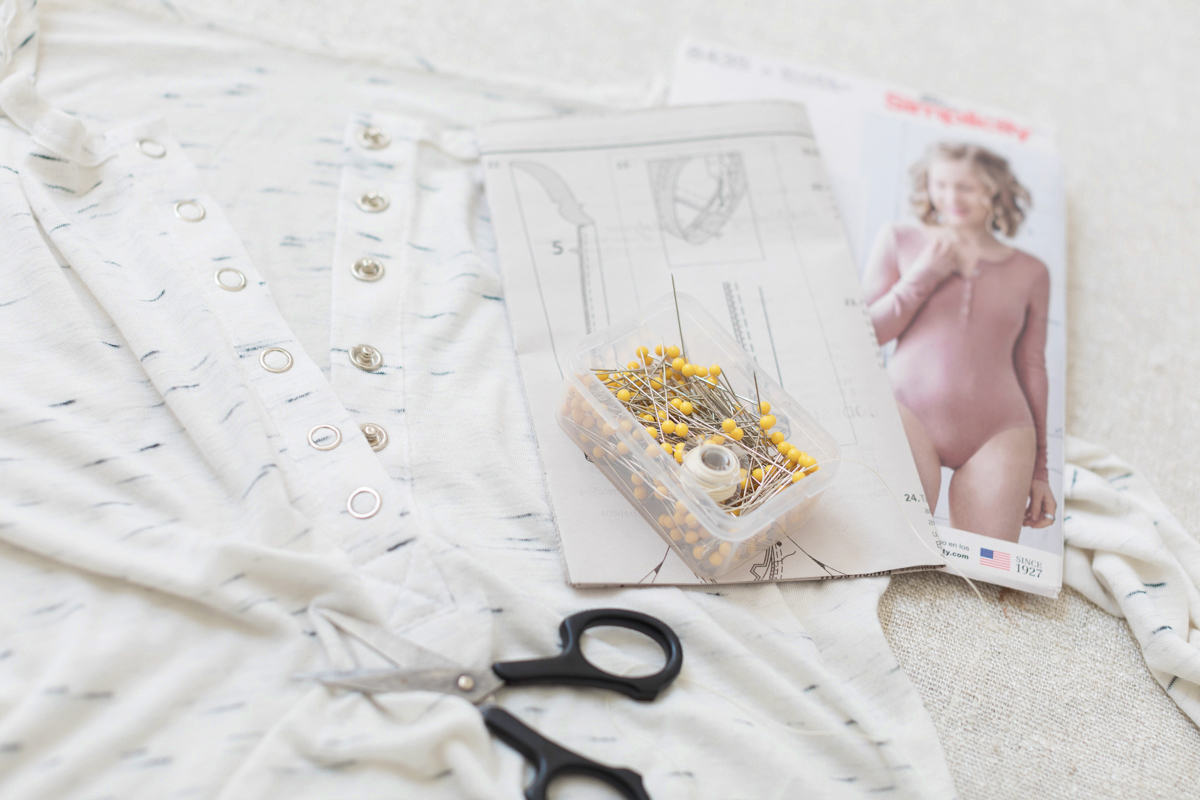 So you need a versatile piece that will be your layering savior in all seasons – winter, spring, summer and fall. Enter: the bodysuit. It’s a staple I didn’t think would be one until I got my pretty little hands on it. Memories of my mom and the likes of Cindy Crawford, both total babes, a la 1990s honestly kept me away for a long time after they re-enter the fashion arena. When it comes to bodysuits, you’re either part of Team Snap Crotch or Team No Snatch Crotch. I’m sure there are folks out there, but I have yet to come across someone who has said, “I don’t mind either.” I’m Team No Snap Crotch. Sorry if it’s TMI, but I either shimmie to the side or (eep!) undress when I’m in the lady’s room. So tres chic, right? Now, if there was a bodysuit that I LOVED and it had a snap crotch – I’d totally buy it. If I had the choice, however, which I do when I’m sewing, I’ll do without.

For the Madalynne X Simplicity 8435 bodysuit (pattern + kits here and here), I wanted to offer the option. It’s easier to eliminate than to add. If you’re a visual person like I am, you learn via pictures. That’s exactly why I posted a full tutorial on how to sew the center front placket and today, I’m here to show you how to sew the snap crotch opening. The pattern comes with directions, and the steps below closely match it, but images are better than illustrations if you ask me. 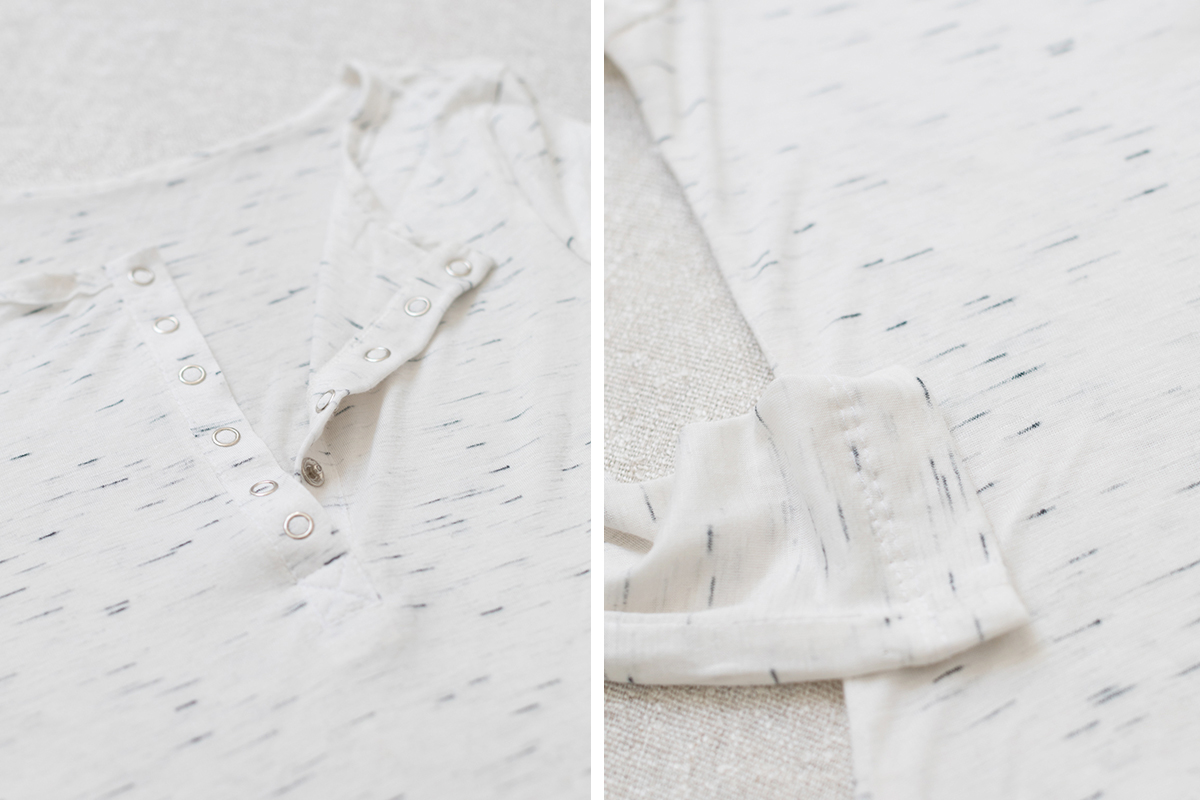 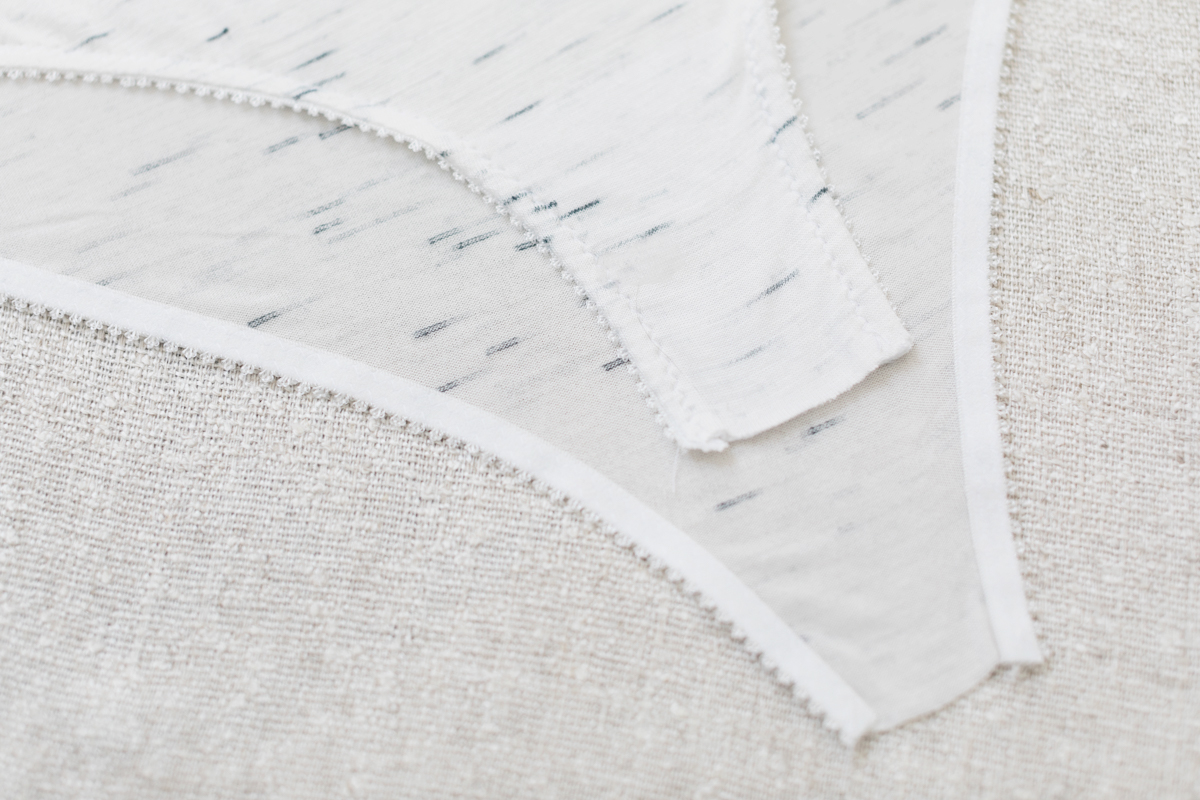 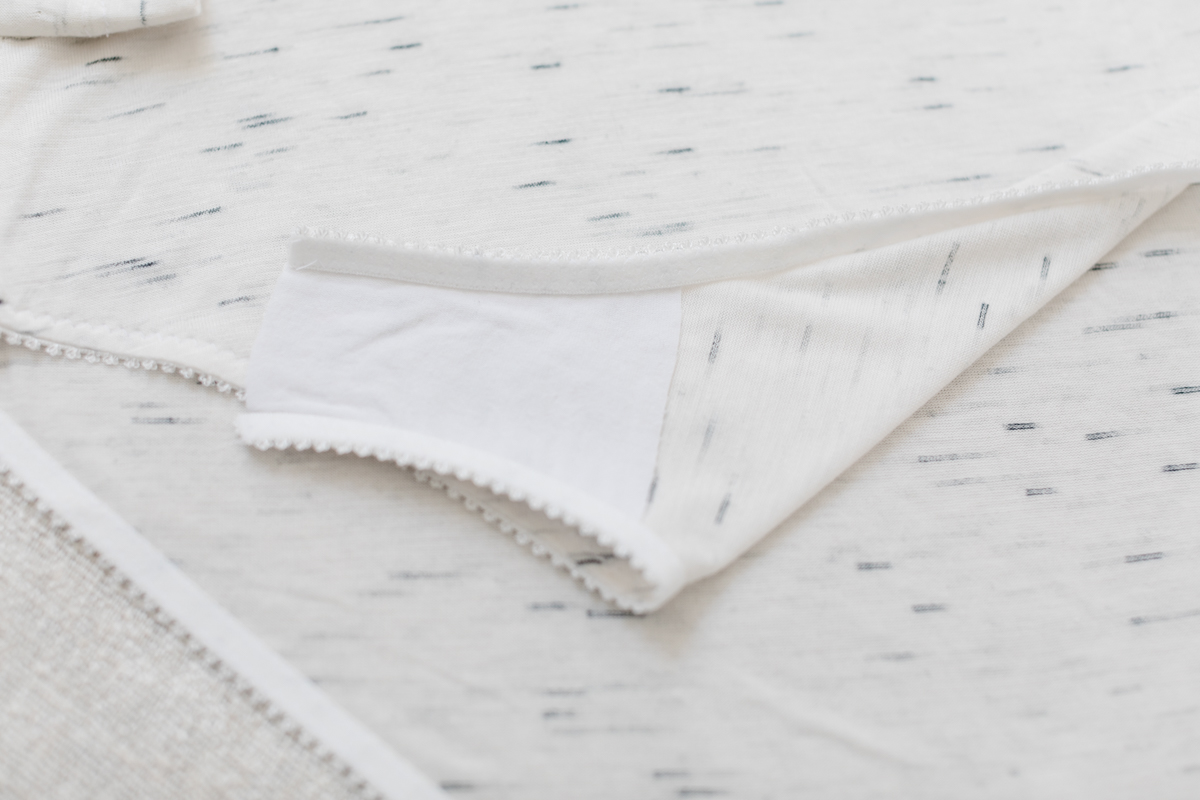 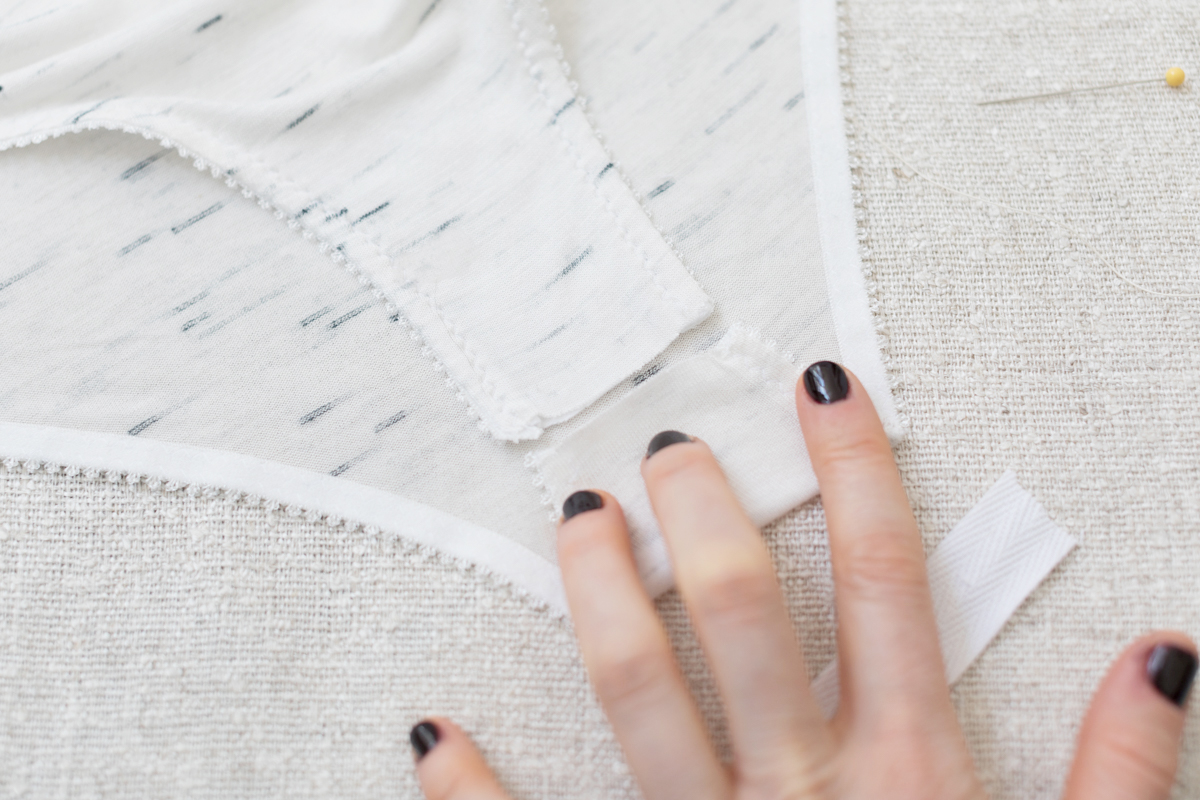 First, let’s consider where you should be at sewing at this point in the project and what you’ll need. The order of operations vary, but for this tutorial, it is the last step. So, I’ve sewn the enter bodysuit except for the snap crotch. Save the worst for last. As for supplies, you’ll need 3/4″ twill tape and sew on snaps.

Also, something to double check when attaching the elastic to the leg opening – make sure that the width of the front and back at 3/4″ in from the edge match. Since the twill tape that will be attached is 3/4″ wide, it needs to match here, not at the edge. Side note – the pattern directions say to finish the leg opening by serging and then turning back, which you can do, but my preferred method is to finish with picot elastic. When creating the pattern, I included as little trimming as possible. 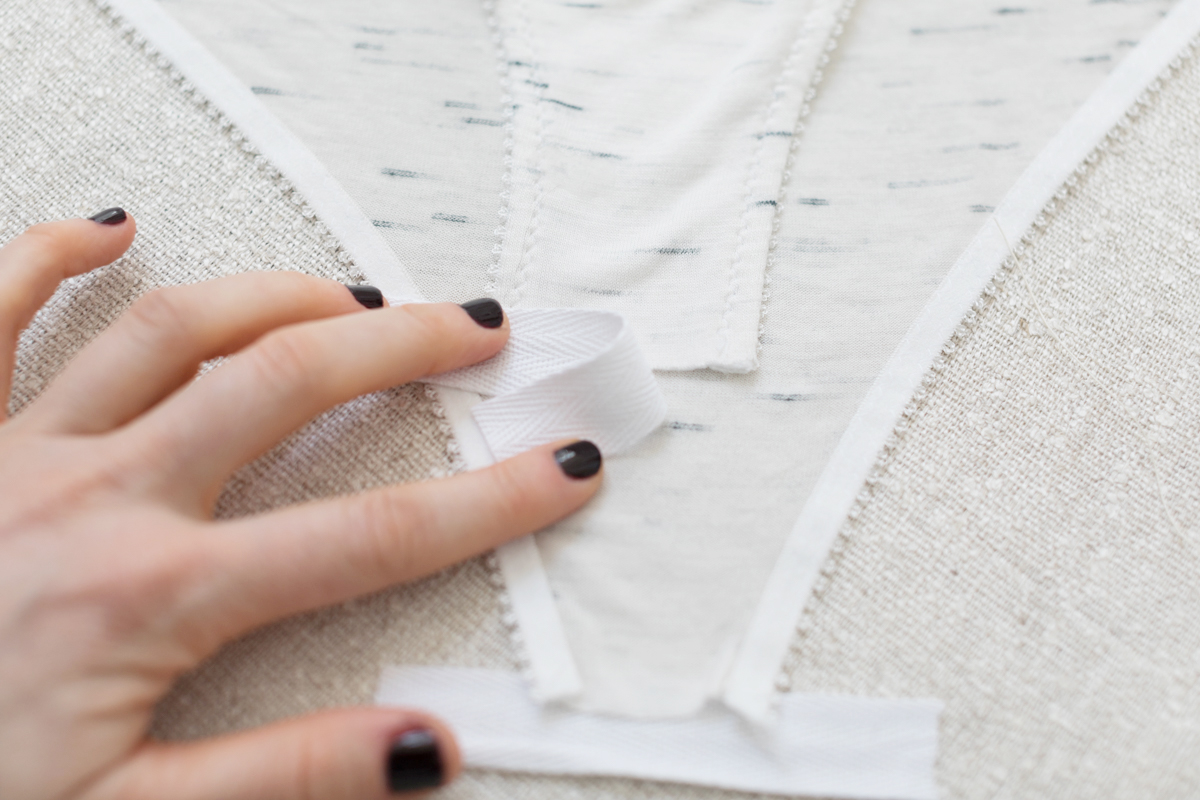 The first step is to lay a piece of twill tape (included in the kit) over the right side of the front crotch opening so that it overlaps 3/8″. Twill tape doesn’t have a right or wrong side, so it doesn’t matter which side is facing the fabric. The length of the twill tape should be approximately 1″ longer on either side. Pin in place and then sew with a straight stitch about 1/8″ away from tape’s edge. 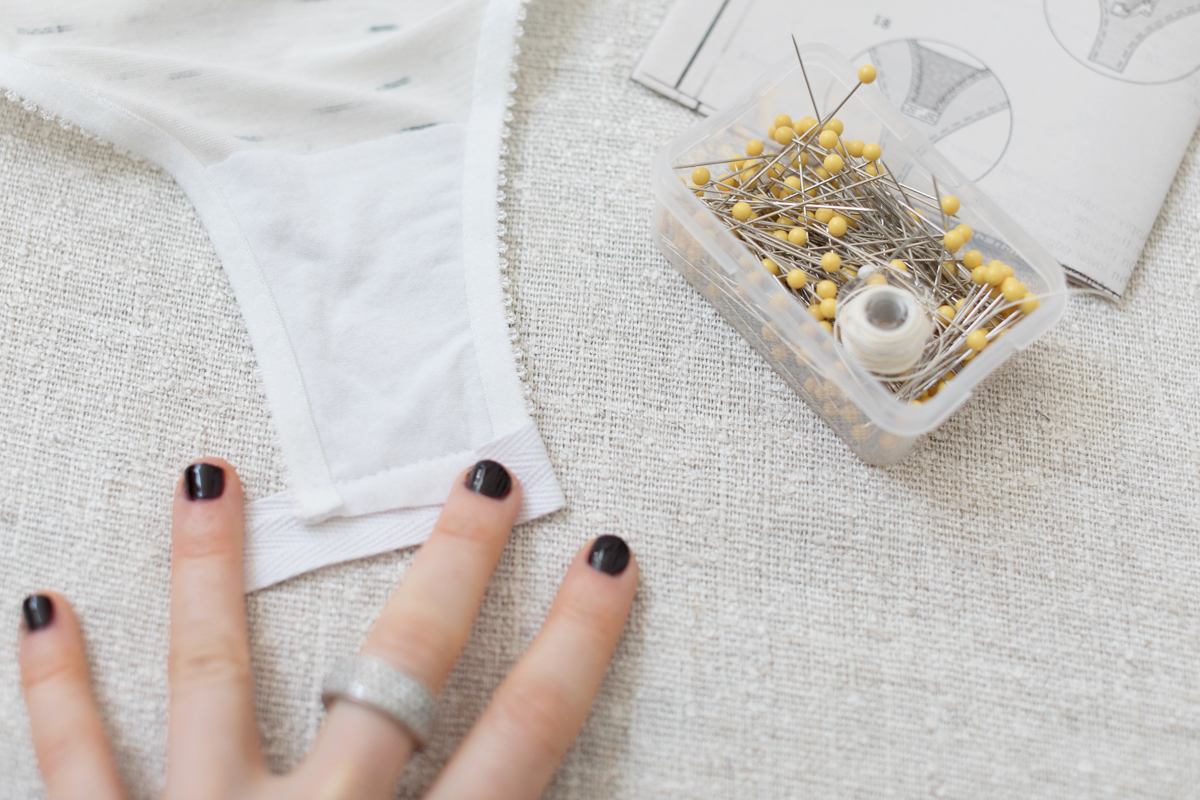 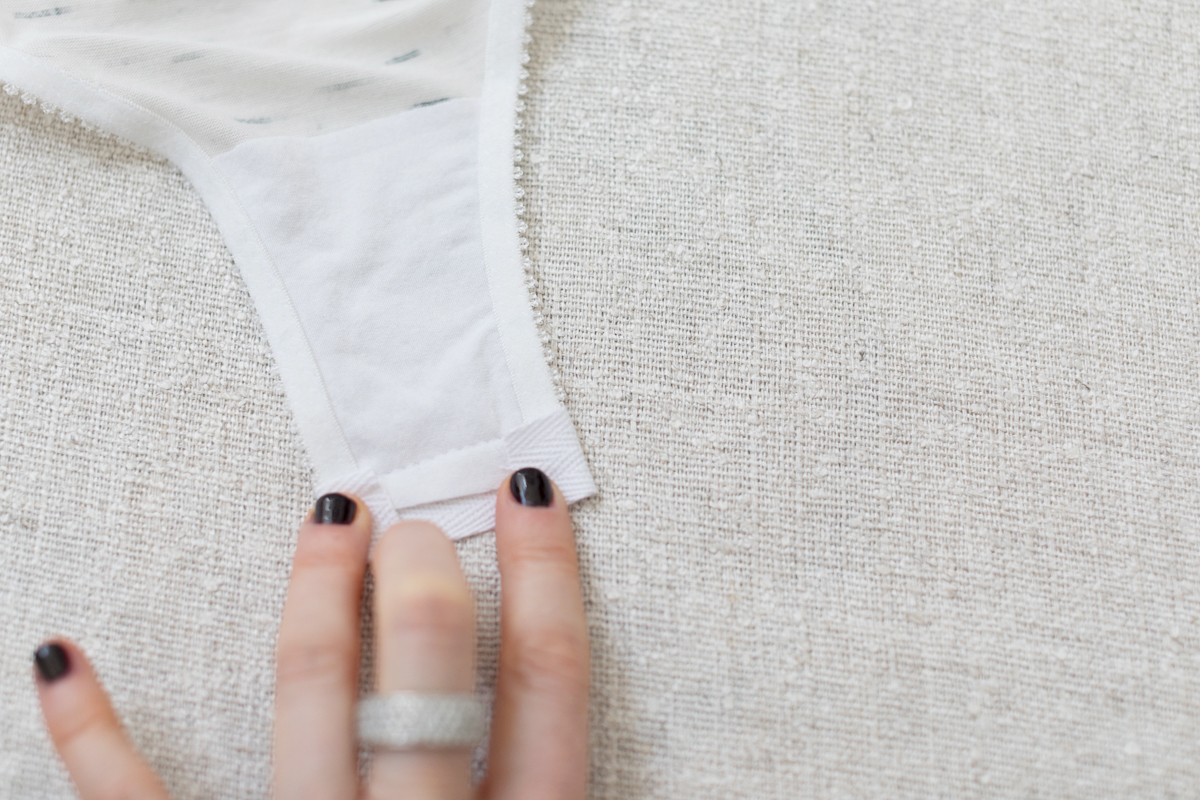 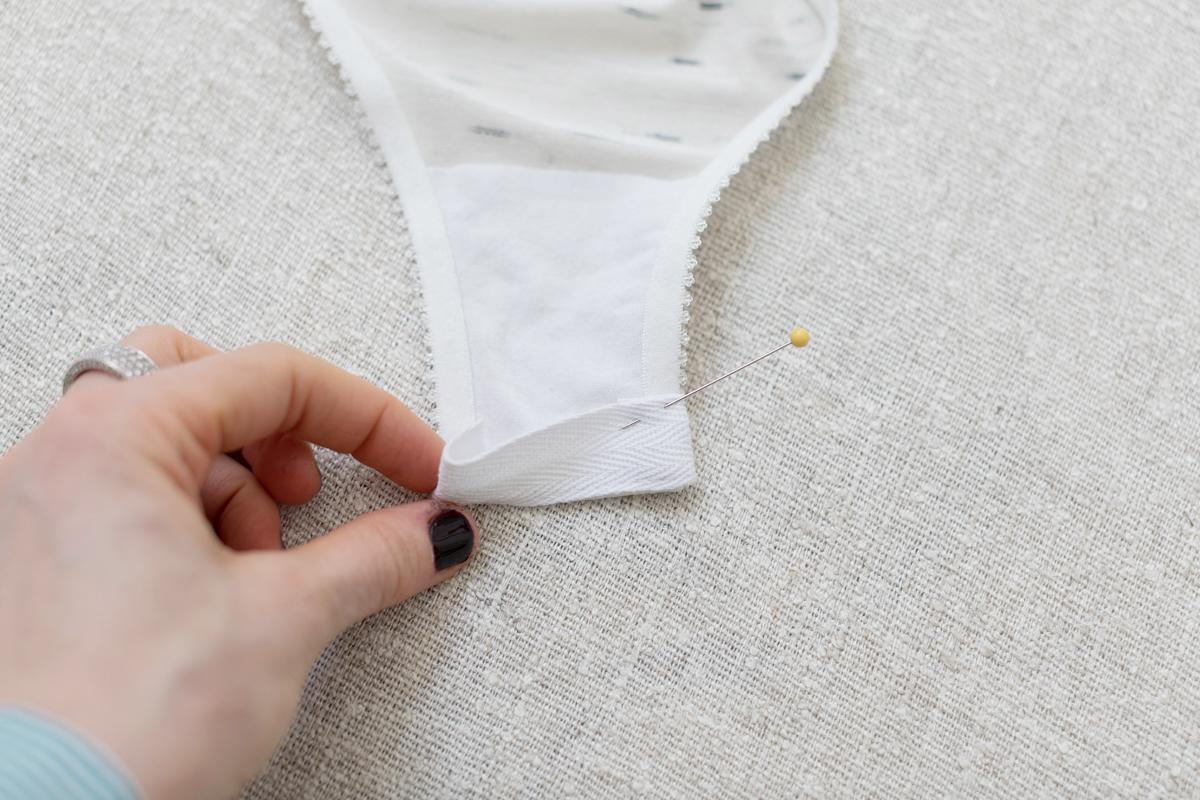 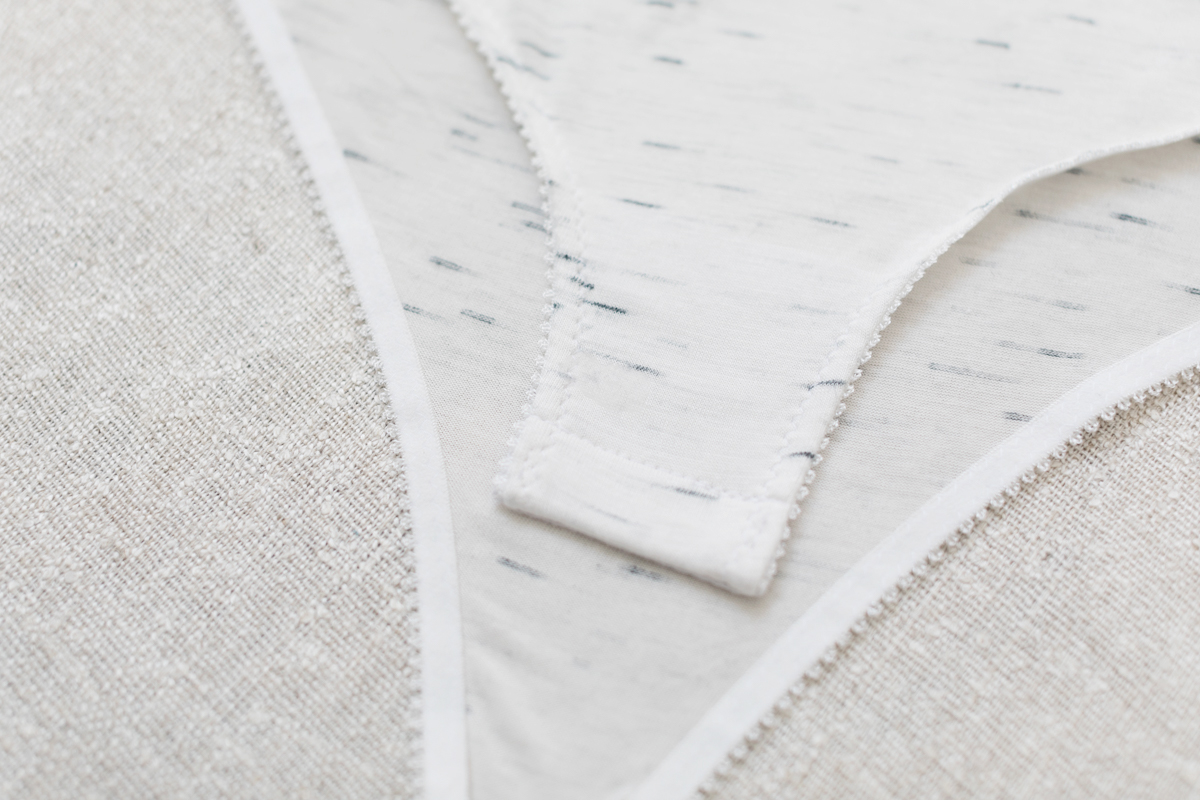 Turn long edges of tape to inside of crotch opening and then turn entire tape back. Pin in place and then sew with a straight stitch about 1/8″ away from other edge of tape. After, center half sockets of two snaps and hand sew in place. 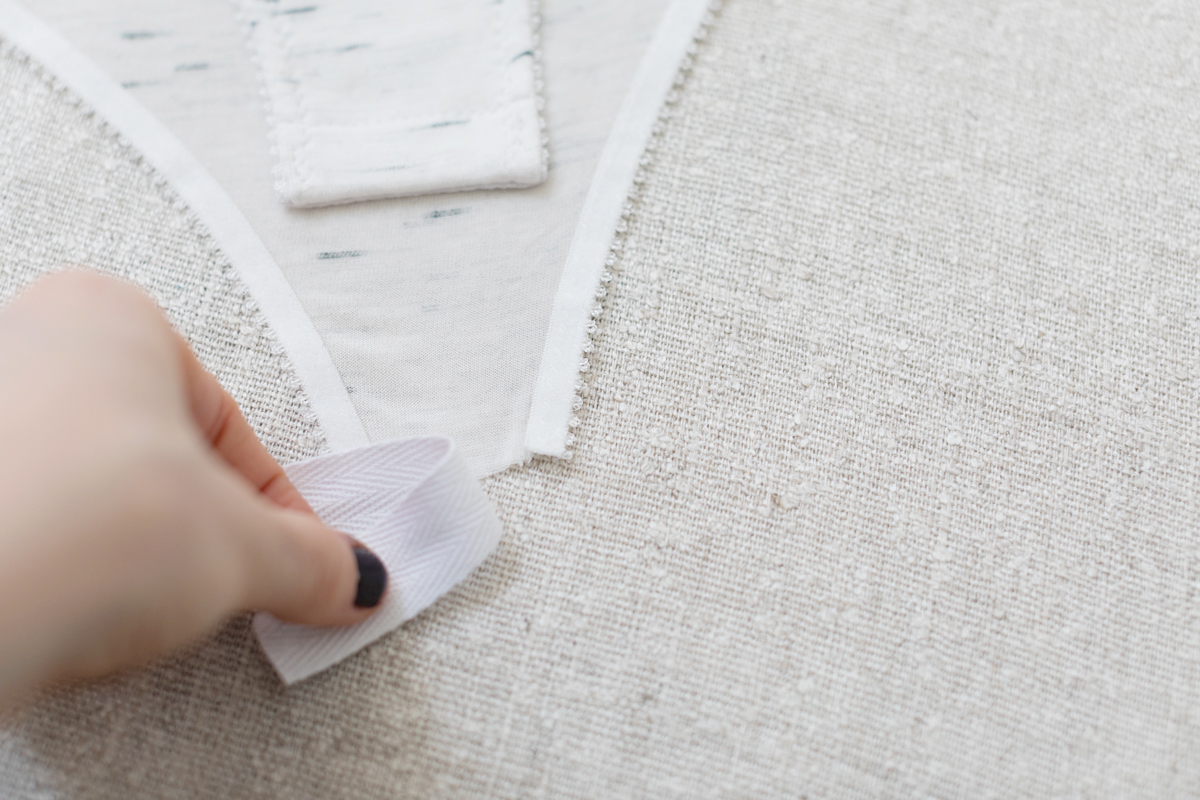 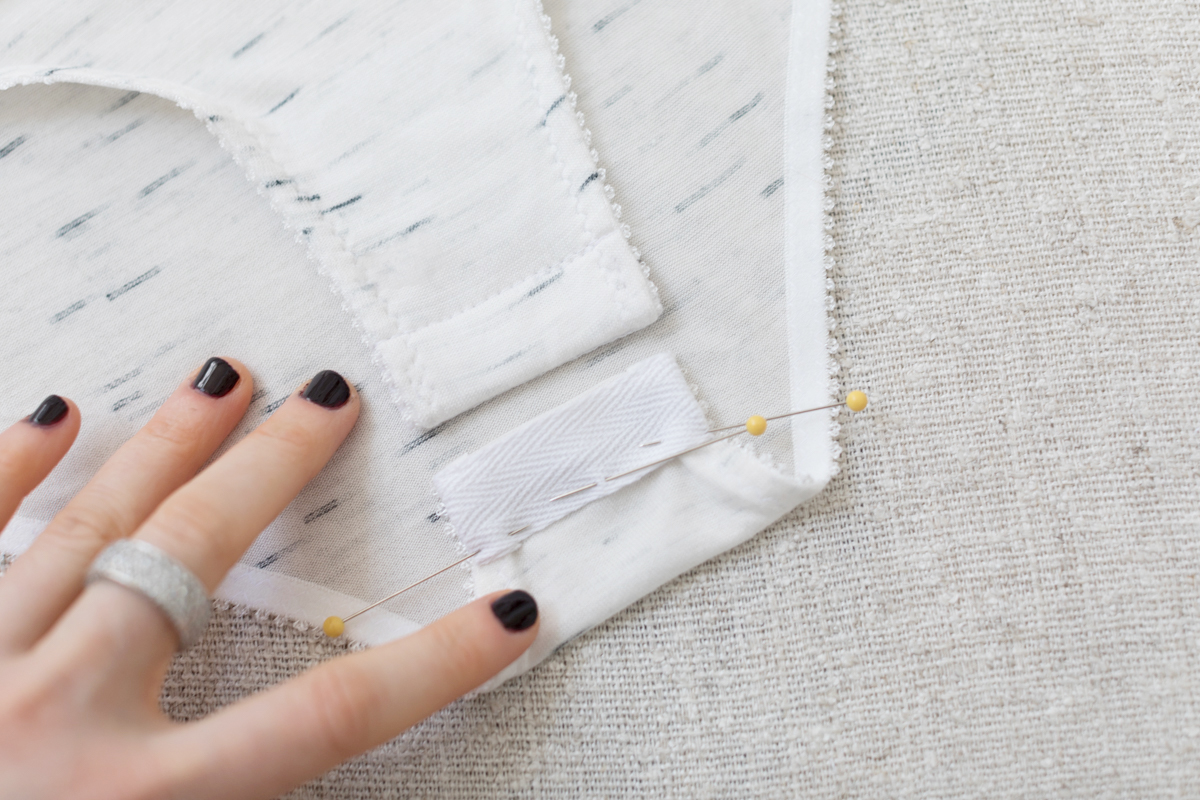 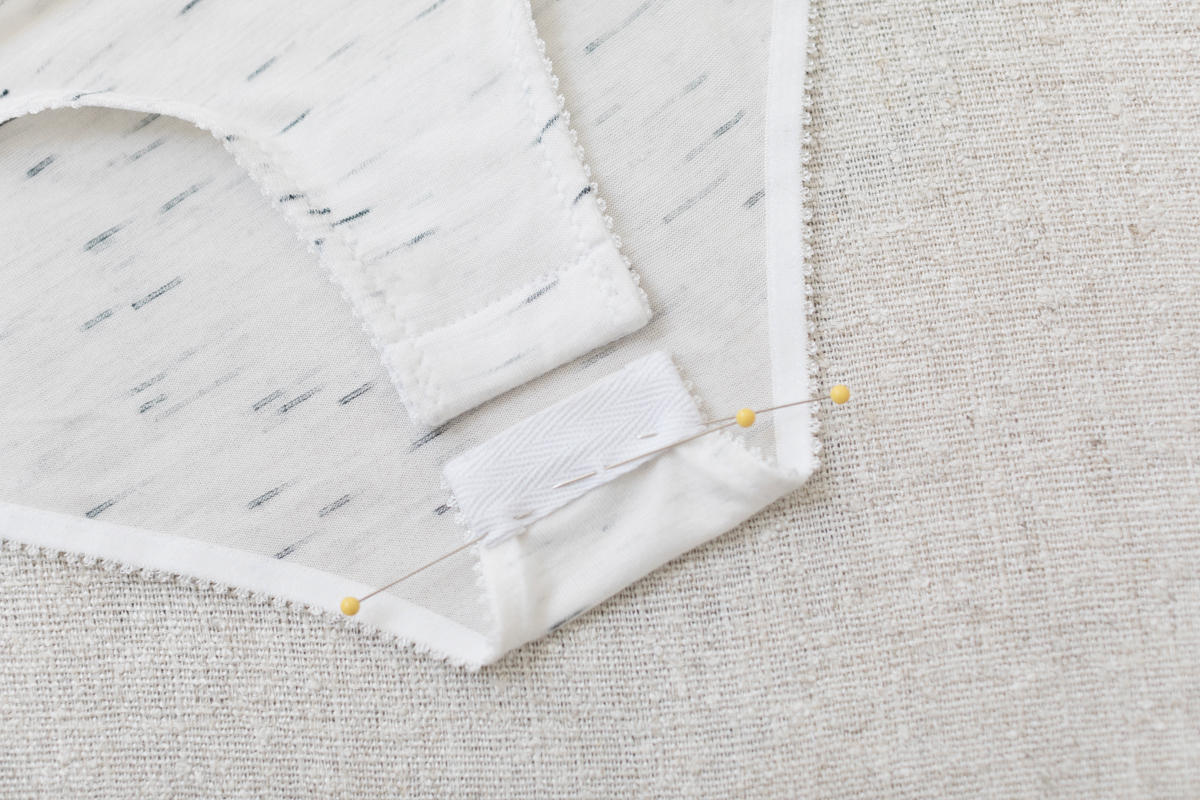 For the back crotch opening, you’ll repeat the same steps, except for the first. Instead of laying the twill tape on the right side of the fabric, you’ll lay it on the wrong side and then flip it to the right side. You’ll also sew two snap knobs instead of sockets.

That’s it! Easy peasy! I hope you enjoy sewing the 8435 and be sure to share your me-mades on Instagram! Tag @mmadalynne and use the hashtag #bramakingwithmadalynne and #simplicitypatterns 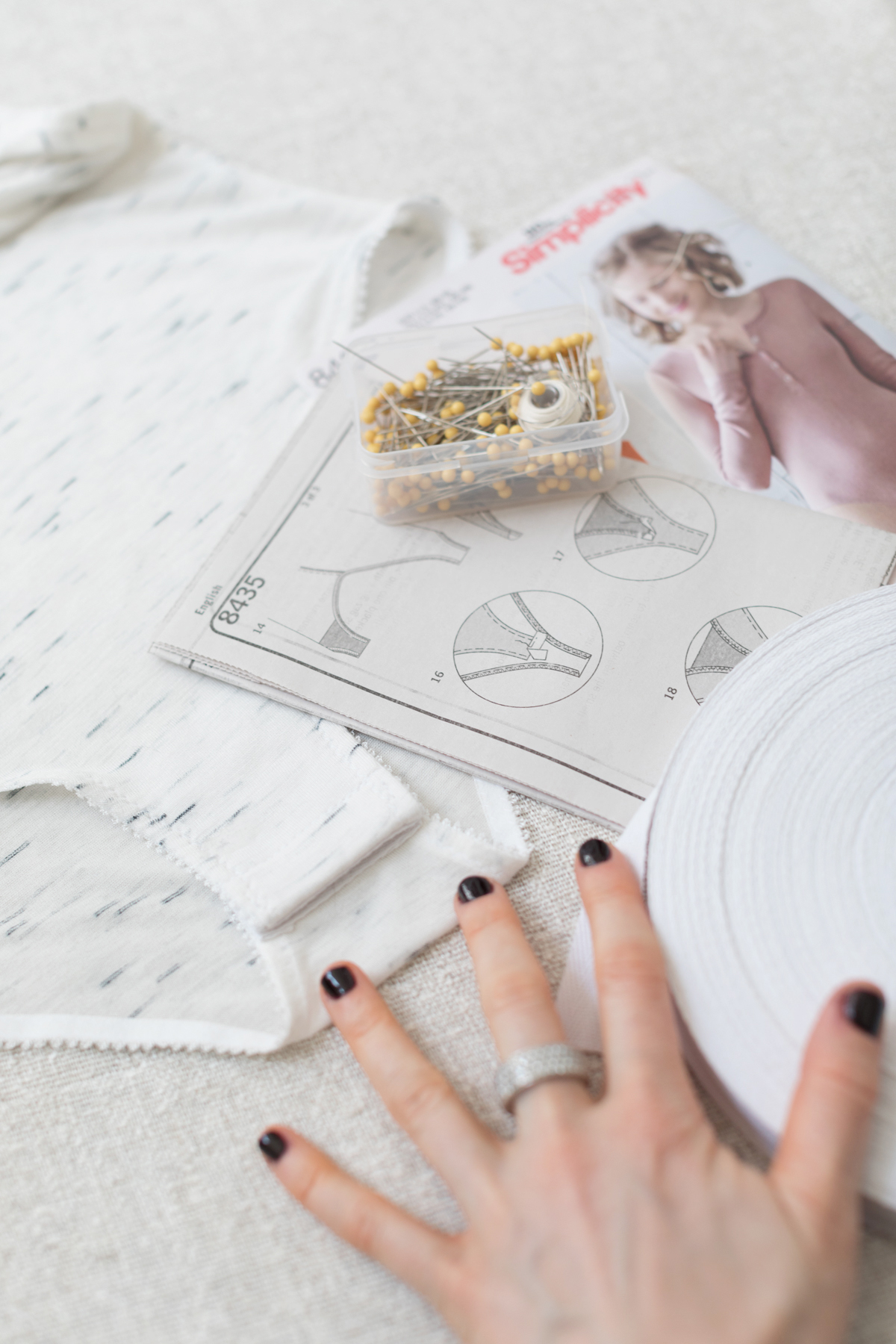